Memoires Of A Suicidal Teenager 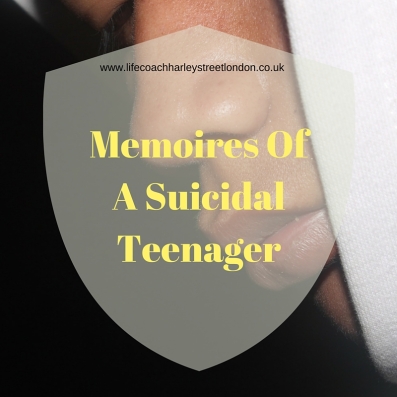 Back in 2000 when I was 16 years old, when I thought life had ended even before it began, I didn’t know there were resources available to me out there nor did I know to whom to turn to, what to do or what to say.

Here is but a summary of the things I felt.

I used to wake up early morning, feeling empty and almost dead, the best way I can describe it is I felt as if someone had taken my heart off my chest and in its place left me with a void, that was what I felt an abyss in my chest which made me feel purposeless and empty.

I couldn’t think straight; it didn’t matter what wonderful things were happening around me I could not get away from the “misery” I was feeling and living.

The lack of friends didn’t help, I felt alone in the world and misunderstood by only one who I thought could do something, my mother.

As you probably will remember, I have said that my mother disowned me; her words were like a dagger that cut deep and through my heart, right into my soul, this is what she said (after finding out I was gay):

“I used to have you in a pedestal, now you are nothing to me”.

Ouch, did that hurt?

It was another nail on that coffin; although, I know she said those words out of desperation and anger, but at the time it hurt pretty bad.

I felt unloved, unworthy and shame and guilt.

I felt unloved by my mother, the one I thought I could turn to; I didn’t see anyone else as family; well I also saw my brother as my family, though, at the time he wished I wasn’t his brother, I wasn’t as “cool” as our neighbour.

I felt unworthy because I didn’t think I was deserving of anything, love, friends, joy, happiness, I had lost if all; in fact, I never thought I had in the first place.

Lastly, I felt shame and guilt, I felt I let my family down for various reasons, for being gay, for having even been born, I destroyed my mother’s hopes for my future, I was ashamed of who I was and what had happened to me.

Though, the “symptoms” of feeling unloved, unworthy, shame and guilt were with me for many years, I just learned to cover them and “pretend” that everything was OK!

Then January 2000 came, this month would change my life forever, literally, I went from feeling “numb” to feeling 100% raw, exposed and totally vulnerable.

I fell in a pretty bad depression, between January 2000 and March of the same year, I was publicly humiliated by a priest I trusted, my mother disowned me and I lost my will to live.

Just in case I hadn’t mention it or that you didn’t know, I fell in love with a priest, and this same priest “kicked me out” of church, made a public announcement saying I wasn’t allowed in church and told my mother I had tried to come on to him; when it wasn’t even true.

I carried that shame with me for months, very few people knew the truth and hundreds if not thousands wondering what had happened.

I stayed away from “his” church and any church for that matter for months, I felt I didn’t belong nor did I want to be there.

Then, one Sunday, I filled myself with courage and decided to go to “his” church and let the world know I wasn’t his prisoner any more.

At the time, it seemed like a great idea; he even seemed glad to see me, I felt even more hurt because he was being nice and pretending nothing had happened.

By this time, I had been on antidepressants for a couple of months, to say they were working would be massive lie, I hadn’t noticed any changes, I seemed to get “worse”.

On Monday 27th of March, I had one of the worst days at high school, it felt as if everyone had turned their backs on me, I felt lonely, sad and even more depressed.

I remembered how the priest had come to me, speaking to me like nothing had happened, and I sank even deeper.

I left school feeling and wishing I had never been born, I had the intention to make it happen, to erase my life from the face of this earth and take with me any evidence that I ever existed.

I froze in time, weighing out any positives from my life, to realise that nothing was screaming at me saying please don’t do it, everything and I mean everything was saying do it, there is nothing worth fighting for.

I was ashamed of myself, riddled with guilt, I felt unloved by everyone and I felt unworthy.

I peeled my antidepressants from their packaging one by one, all 47 of them, filled a glass with water and proceeded to count them, as if that would achieve anything.

I played with them waiting for a sign, which never came, I put all the tablets in my right hand and took them all at once, without hesitation or guilt, and I did this in front of my younger brother, who probably thought I was playing.

Little did he know that I wasn’t playing a game, but playing with my life instead!

For the first time in my life, I felt in control, I was in charge and I didn’t regret my decision, I was about to put an end to what I had lived by then.

So, at 2 o’clock on that Monday afternoon I went to sleep hoping to never wake up.

I will share more about my story in future blog posts, stay tuned in.